Join the Rebels or the Dark Side and defend your faction 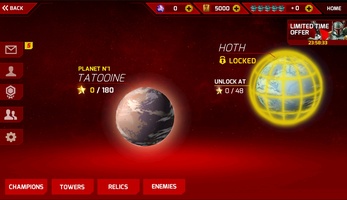 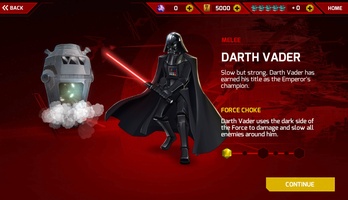 Advertisement
Star Wars: Galactic Defense is a tower defense game set in the Star Wars universe. In it players choose whether they want to join the Rebels or the Dark Side, confronting the opposite side in intense strategic battles.

Gameplay in Star Wars: Galactic Defense will prove familiar to anyone who's ever played a tower defense game before. Players must set various defensive turrets along a road, trying to prevent the waves of enemies from getting to your base.

The most novel aspect of Star Wars: Galactic Defense is that besides placing and upgrading the towers around your scene, you can also directly control a character. For example, you can play Darth Vader, fighting hand-to-hand against enemies and even using special powers.

The graphics in Star Wars: Galactic Defense are spectacular, with beautiful scenes that seem painted by hand and highly detailed 3D character models.

Star Wars: Galactic Defense is a tower defense game of excellent quality, with dozens of different scenarios, loads of possible upgrades to your towers, and, above all, a huge range of characters from the Star Wars universe.
Reviewed by Andrés López Translated by Taryn

This game is very fun

Car Parking Multiplayer
Drive around an extensive map for a realistic parking experience
Clash of Clans
Crush enemies and lead your clan to glory
Mobile Legends
An excellent, but shameless, League of Legends clone
Scary Teacher 3D
Escape the terrifying teacher!
Bus Simulator Indonesia
Drive a bus through Indonesia with this simulator
Clash Royale
Clash of Clans characters face off in epic duels
Lords Mobile
Lords Mobile: Build an empire to destroy your enemies
Plants vs. Zombies FREE
The original Plants Vs Zombies, free for the first time